Our Next Show – Encore!

Posted on September 24, 2018 by wimbornemusical

Wimborne Musical Theatre celebrates 50 years in musical theatre and to mark the occasion is producing a special concert to reprise some of the wonderful songs from the many musicals performed over these years.

For this special concert the Society are delighted to have Stuart Darling as Musical Director. Stuart is well known for his work with other musical societies and theatre schools in the region. The show will be staged and choreographed by Gemma Davis and Lee Redwood

Featuring some of the best songs from Anything Goes, Carousel, South Pacific, The King and I, Sister Act, Oliver, 9 to 5, Oklahoma, My Fair Lady, Sound of Music, Crazy for You, Calamity Jane, Fiddler on the Roof, Annie Get your Gun, and more, this is a show you do not want to miss! 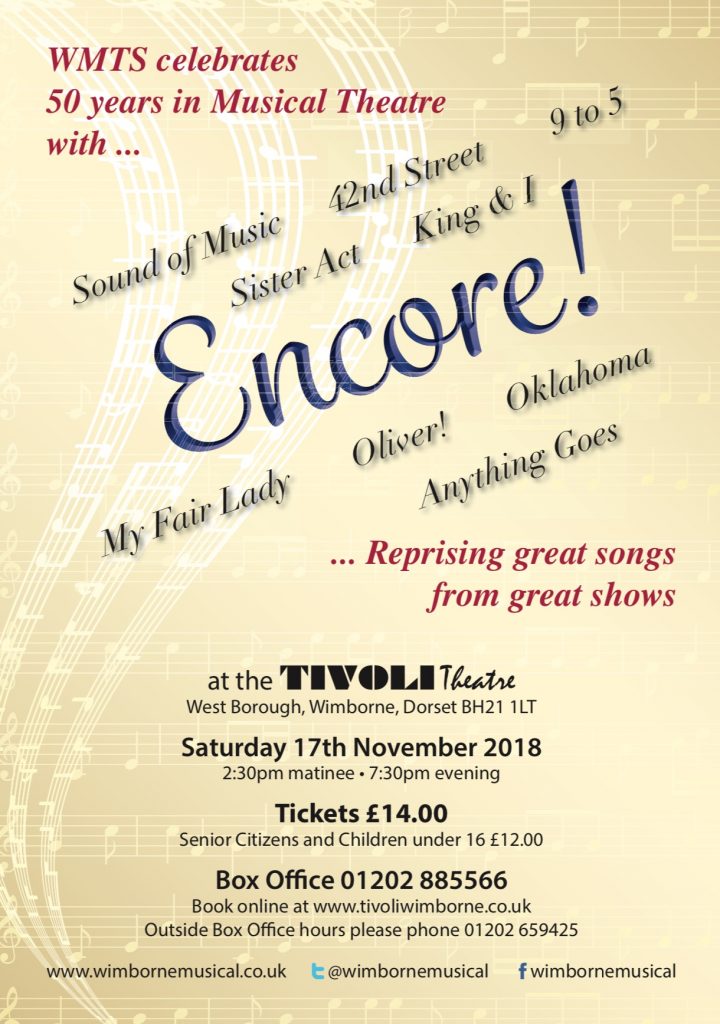 Review: 9 to 5 The Musical, in SceneOne

Social revolutions usually proceed in steps, and it is only by looking back that one can see what the major landmarks were. In women’s fight for the equal rights and respect to which they are entitled, the recent emergence of the #MeToo movement will surely be seen to have loomed large; in a very different way and on a very different level, the 1980 film 9 to 5 will have played its part too, especially in its 2009 re-incarnation as a musical composed by Dolly Parton.

It tells the story of three women working in a soulless office dominated by a ruthless, sexist boss, who promotes only men and regards women as good for just one thing: guess what. The three conspire to kidnap him and to take over the office, making it a more human and sympathetic – and successful – place. For sure, it’s a rather far-fetched plot, but through music and comedy, it makes its point far better than a humourless coven of dungareed harpies could ever do.

It is a show that tests a society’s depth of talent because it calls for three really strong female leads, and this production has got them. Julie Sissons as their leader, Violet, is outstanding. She dominates every scene she is in, moves well and has immaculate timing. Just occasionally she tends towards the strident, but the power of her performance is that she portrays a woman who is a very strong character but also attractively feminine. Selina Rumbold is the (initially) hopeless ingénue Judy, and subtly conveys how Judy’s personality grows as the story unfolds; the confidence and energy with which she belts out ‘Get out and stay out’ in act 2 is proof of that. Doralee was the original Dolly Parton role, and Hermione Mason plays her with appropriate buxomness, both literally and figuratively. She shows herself a talented comedienne in ‘Cowgirl’s revenge’. All three sing beautifully, and their harmonies in ‘I just might’ and ‘Shine like the sun’ are among the best things in the show.

The performance of Lee Neal as their odious boss –‘what a rat, what a liar, what a creep’ – suffers not at all by comparison with these three. You almost end up liking him for the enthusiasm with which he embraces his unpleasantness, and his comic timing is impeccable. His worshipper in the office – so the sworn enemy of our three heroines – is Roz, and here again, one ends up feeling sorry for her thanks to Beverley Beck’s sympathetic interpretation. Duncan Sayers as Joe make the most of his one number, ’Let love grow’.

The minor parts played by members of the ensemble are a little difficult to differentiate; what cannot be mistaken is the enjoyment which the whole cast get from the modern, upbeat music. Suzi DeVilliers’s energetic choreography helps; the ladies dance delightfully, but the highlight is definitely the cavorting of the men in ‘One of the boys’.

Director Duncan Trew has set the action against a cleverly simple basic set. This serves as the background to mini-sets and props that are manipulated on and off stage at enormous speed by the stage crew and cast. The music in no way lets down the other aspects of the production; the musical director is Alastair Hume.

It is a show that everyone (especially men) should see, and this is a production that you will enjoy. It is at the Tivoli until 30 June at 7.30 each evening.

Presenting 9 to 5 the Musical! 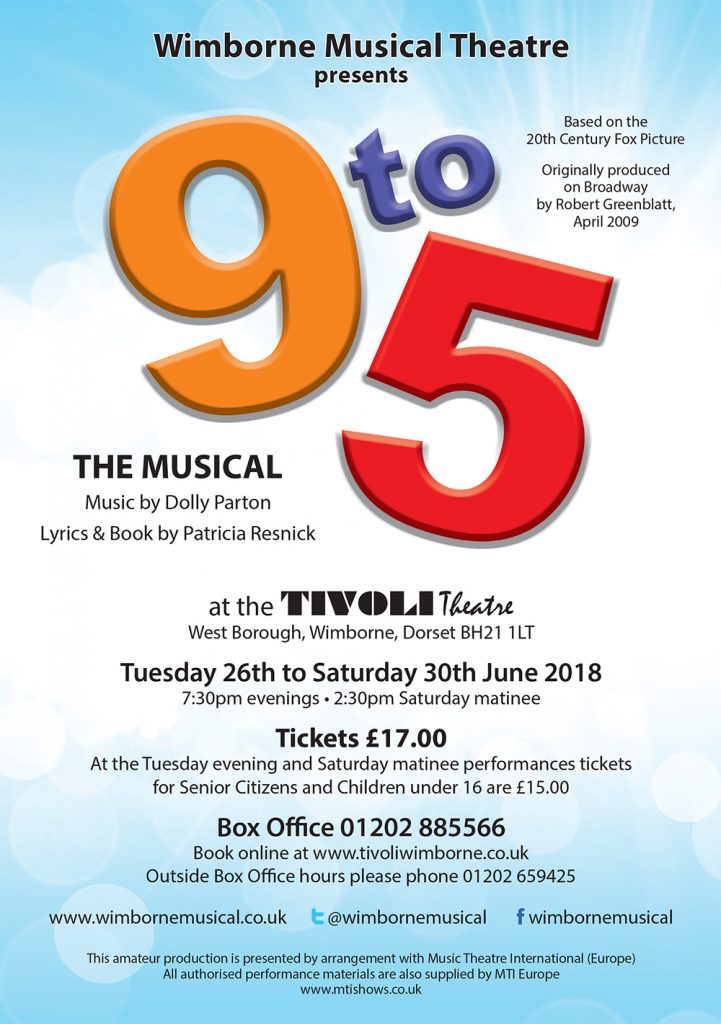 Announcing our next show!

Posted on January 22, 2018 by wimbornemusical

Wimborne Musical Theatre is pleased to announce the details of our next show!

Based on the 20th Century Fox Picture

Posted on November 17, 2017 by wimbornemusical 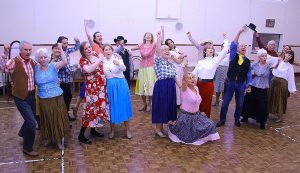 Don’t be worried! Wimborne Musical Theatre Society (WMTS) are just showing their enthusiasm as they rehearse for their next show following the success of Sister Act in the summer.

The next show is “The Best of the West End” a concert that and features an eclectic mix songs from many of the wonderful musicals that have been on stage in London past and present. Here some WMTS members ‘ dressed up’ for a great song from Oklahoma, but this is just one of over 40 songs they will be performing ranging from solos to full company and some with nifty dance routines as well.

WMTS will be performing The Best of the West End at the Tivoli Theatre in Wimborne on November 18th.There are two performances, at 2.30 and 7.30. Tickets are £14 each (at the 2.30 matinee, Over 60s and Children under 16 are only £12). Tickets can be booked at the Tivoli box office or online.

WMTS invite you to join them and promise …no fisticuffs!!

Posted on November 17, 2017 by wimbornemusical

Don’t be fooled into thinking that Wimborne Musical Theatre Society (WMTS) are on skid row! They are busy rehearsing for their next show following the success of Sister Act in the summer.

The next show is “The Best of the West End” a concert that and features an eclectic mix songs from many of the wonderful musicals that have been on stage in London past and present. Here are some WMTS members ‘ dressed up’ for a great song from Annie, but this is just one of over 40 songs they will be performing ranging from solos to full company with some with nifty dance routines as well.

Tickets can be booked at the Tivoli box office or online.

WMTS really want you to come otherwise they might actually end on skid row!

New Show: The Best of the West End

Posted on August 20, 2017 by wimbornemusical

We are delighted to announce that our next show (now on sale) is The Best of the West End!

A compilation of popular songs from modern musicals with a touch of nostalgia from the past, including Cabaret, Annie, King and I, Spamalot, West Side Story, Anastasia, Buddy, The Jersey Boys, Mamma Mia and many more, the show promises to have your toes tapping and your memory jogged! 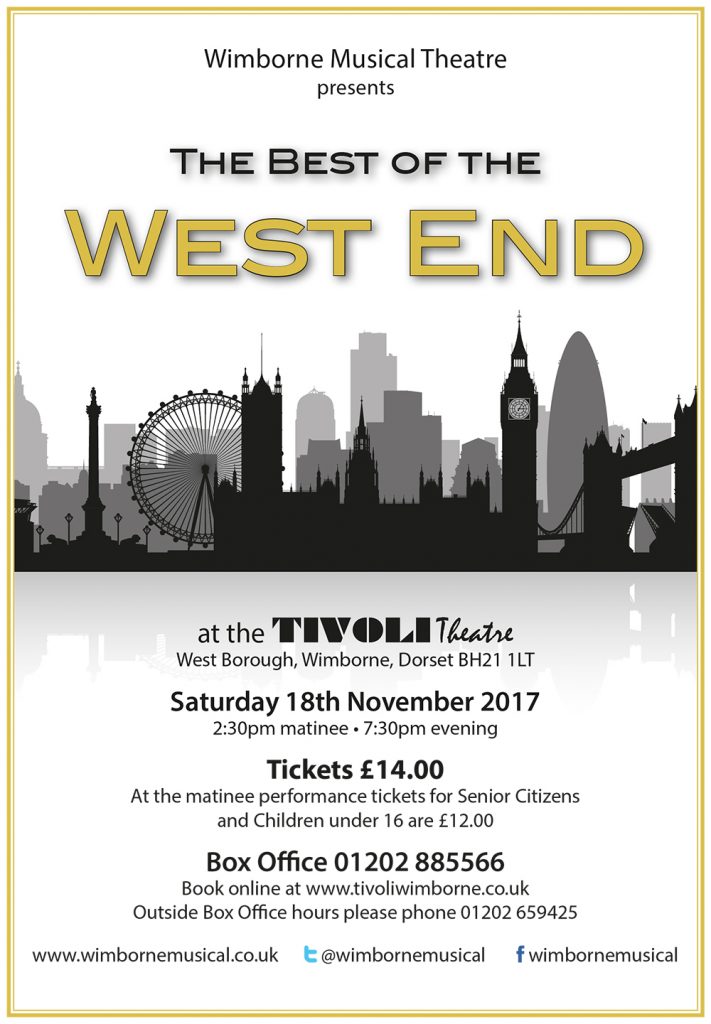 Posted on August 2, 2017 by wimbornemusical

Sister – it is becoming a habit with this group to produce a well-rehearsed and heartwarming evening of entertainment.

The first half sets the scene for some rousing and joyous songs from the large cast in the second half.

Sharron Pearcy oozes confidence – as she always does – as disco diva Delores who, as a witness to murder, is put into protective custody in a convent.

And the transformation of her appearance gives plenty of opportunity for comedic touches.

Lee Neal has just so much stage presence that he never fails to dominate his scenes, and he almost mesmerising as Curtis, the villain of the piece.

However, it has to be said that he also gets impressive backing from his three stooges, Pablo (John Bounds), TJ (Miles Bailey-Breangaard) and Joey (Bill Mason) whose disco moves are great fun.

Julie Sissons puts just the right amount of authority into the role of Mother Superior with her clear singing voice and excellent diction.

Hermione Mason, with her strong voice is maturing into a very proficient actress who is very at home on the stage.

And the costumes are pretty good too.

With a cast of 23 it is not possible to mention everyone, but all play their part in making this a musical worth seeing.

It runs until Saturday.

Posted on August 2, 2017 by wimbornemusical

Thanks to numerous screenings of the film on TV, not to mention a number of theatrical productions of the show in recent years, there can be few people now who are not familiar with the story of a disco diva, Deloris Van Cartier, who witnesses her boyfriend commit murder and, for her own safety, is put into protective custody in the one place she is unlikely to be found – a convent. However, if perchance you’ve been marooned on a TV- and theatre-less desert island and have never come across this heart-warming show, do go along to the Tivoli Theatre this week and catch WMT’s version, because I really don’t think you could see a better production.

From the opening bars of the overture to the final curtain calls, there is never a moment when joie-de-vivre doesn’t bubble off the stage into the auditorium and envelop us all with a warm glow. Much of this comes from Sharron Pearcy’s first-class interpretation of Deloris, a role that suits her to perfection and sets the standard for the evening, but every single person on stage, whether principal or chorus, is a credit to the society and to the production team of Duncan Trew (director), Alastair Hume (musical director) and Suzi DeVilliers (choreographer).

The principals really are as good as they get, with stand-out performances among the excellent nuns from Julie Sissons (Mother Superior) , Hermione Mason (Sister Mary Robert) and Jemma Cable (Sister Mary Patrick). There are strong, reliable performances too from Lee Neal (Curtis) and Phil Evans (Monsignor O’Hara), although the latter’s ‘Irish’ accent does occasionally make his words a little difficult to make out. I also particularly liked Duncan Sayers’s superb characterisation of Eddie, and Miles Bailey-Breandgaard gives an amusing and highly memorable performance as TJ. It isn’t always just those in major roles who make an impression either, and in the opening scene both Sophie Adnett (Michelle) and Georgia Brebner (Tina) have a huge impact with their lovely smiles and super dancing skills.

With good sets and costumes, a great band, superb sound and lighting, excellent singing, great choreography and totally natural performances from all, this production must surely go down as one of WMT’s best – and what I loved most of all was that absolutely everyone seems to be having the time of their life, with not a single glum face to be seen.

(Originally in published on SceneOne)

Posted on July 6, 2017 by wimbornemusical

Wimborne Musical Theatre will be raising their voices in Sister Act at the Tivoli Theatre from 1 to 5 August.

When disco diva, Deloris Van Cartier, witnesses a murder, she is put in protective custody in the one place the cops are sure she won’t be found: a convent! Disguised as a nun, she finds herself at odds with both the rigid lifestyle and the uptight Mother Superior. Using her unique disco moves and vocal talent to inspire the choir, Deloris breathes new life into the church and community but, in doing so, blows her cover. Soon the gang is giving chase, only to find them up against Deloris and the power of her newly found sisterhood.

Filled with powerful gospel music, outrageous dancing and a truly moving story, Sister Act will have you ready to spread the love around.